Founded in 1907, the Swedish Sea Rescue Society handles some 80 per cent of all rescues in Swedish waters. As a voluntary society which receives no government funding, it is supported entirely by membership fees, donations and fund-raising activities. Its pagers are used for calling out the lifeboat crews – all of them local volunteers – when an emergency is reported. The call must reach them reliably whether they are in their homes, at their workplaces or out and about. «They have15 minutes  the alarm to go to the boats», explains Lars Samuelsson, Director of maritime departmentof at SSRS. «We can have different tone alerts depending on what kind of alarm – they can hear on the pager whether they’re in a hurry or not in a hurry.»

Digital paging infrastructure based on the well-established POCSAG standard is provided by Swissphone partner Contal, which is also a major communications provider for Sweden’s fire brigades. Discussions with Contal on the upgrade opened in 2013, when the society began a search for a system to replace its ageing VHF analogue pagers. Contal offered a fully managed network solution based on its flexible client/server design, with a server located at the sea rescue headquarters in Gothenburg and linked to local sites all along the Swedish coastline and on the larger inland lakes.

Getting specific information With the new Swissphone s.QUAD X35 pagers chosen by the society - some 1000 of these are in use – its volunteers can receive, alongside an audible or silent alert, a text message giving brief details or instructions. By allowing them time to prepare themselves, this extra information can be especially helpful for lifeboat crews, who are typically called out less often than the other emergency services.

Lars Samuelsson: «When we had the analogue system, it was mostly just the alert signal, and  sometimes we heard a voice talking, but most of the time the volunteers did not know what the alarm was about. Now where we have the digital system, when the rescue co-ordination centre sends out the alarm, they can read the text in the display and they can see what the alarm is about – and that’s very important for them.»

Contal was able to find synergies with its fire service infrastructure, saving money for the lifeboat society by enabling it to share many existing fire brigade radio sites. «Because we combine and can also use repeaters from the fire brigade, we get very good coverage for the volunteers », comments Claes Ahlstrom, of Contal. «We have very good indoor coverage with POCSAG and it’s cost-effective – using the Swissphone pagers, which provide the best sensitivity in the market, we can offer an excellent solution to the volunteers.

While the primary alerting for lifeboat crews takes place over the POCSAG network, Contal has also extended it to radios on Sweden’s Rakel system, the national TETRA-based radio network dedicated to the emergency services. In this way, a second wave of alerting can be transmitted independently. But for the lifeboat volunteers, Rakel radios are no substitute
for POCSAG pagers. «TETRA terminals are very expensive, and they are too big to carry in your ordinary life. In addition, they need to be charged every day», says Lars Samuelsson. «Our crews are at their work or they are at home there doing something else, and there needs to be a small alerting system that can be carried in their pocket, does not have to be charged every day and will also give a good sound when the alarm goes off. Therefore, a paging system was the best choice.»

«We have the digital system, when the rescue co-ordination centre sends out the alarm, they can read  the text in the display and they can see what the alarm is about – and that's very important for them.»
Lars Samuelsson, Director of maritime departmentof at SSRS

Rakel terminals are installed within the boats, he adds,and a few are provided in each lifeboat station, according to local needs. But a significant drawback is that an annual licence fee is payable to the government for every terminal. «For Tetra in Sweden, you have to pay a licence fee for each unit, and so POCSAG is more cost-effective for a sea rescue organisation», he says. «With the POCSAG system we have no licence costs.»

Smartphones and apps were also considered as a potential means of alerting. But while most crew members today
carry smartphones, the public mobile networks are not regarded as reliable enough for the service to depend on them. The private POCSAG network is seen to be much more reliable.

«The s.QUAD X35 is very reliable and offers excellent battery autonomy. Also, we have a very good  relationship with Swissphone. If something comes up, we always get timely and competent support.»
Claes Åhlström, Contal Security AB, Business Development

After months of successful testing, with no negative comments from its users, the new system is now in service. But one strong positive reaction received by Lars Samuelsson concerns the battery endurance of the new Swissphone pagers, which can operate for up to three months on a single R6/AA dry cell. «Lifetime for the battery is very good and that’s a very big step forward compared with older pagers, portable radios or smartphones», he says. 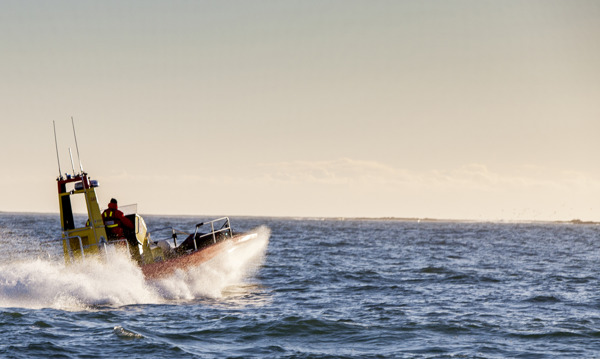